by Denielle B January 11, 2022
Jump to Recipe Print Recipe

Cinnamon rolls, anybody? These cinnamon rolls are super soft and floofy, topped with a cream cheese-sour cream frosting. They’re great warm, and they’re not that sweet!

So I actually made these rolls more than a couple of times to really get the right proportion of ingredients. I can be very particular about the texture of my cinnamon rolls because I prefer it when I can eat them the next day and not be chewing on tough bread. After several sessions of recipe-testing, I finally got it! They’re so tender, has just the right amount of sweetness, AND they’re great even after a day or two as long as you microwave them for 20 seconds prior to eating.

Working with the dough

Testing this cinnamon roll recipe is actually the first time I’ve committed to working with bread dough. I’ve always thought making any type of bread dough was intimidating, and to be honest, it is still kinda is. BUT, the more I forced myself to just keep trying, the easier it got and the more confident I became. With these cinnamon rolls in particular, I had to trust that I got the right ratios of dry and wet ingredients, and to not overly correct with flour if the dough is still wet. According to a lot of bakers, wet dough is good for tender rolls, so even if it feels wrong, you just kinda have to go with it and trust that it’s going to be great!

If you’ve been reading my blog for some time, you know by now that I don’t like desserts that are too sweet. Part of why I created this blog is to show other home bakers that you can cut the sugar without compromising deliciousness. So for the frosting, I decided to mix the cream cheese with a bit of sour cream to counterbalance the sweetness. And to be honest, the final result is perfectly sweet enough for everyone who have tried my cinnamon rolls. 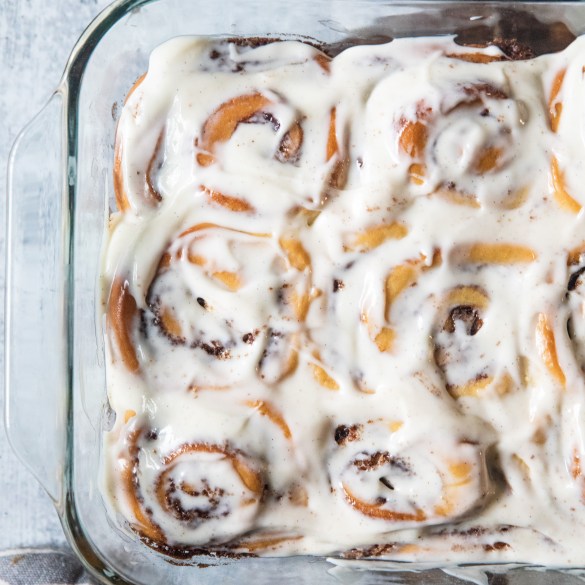 *Use the flour sparingly! I promise that even though the dough feels wet, that's how it's supposed to be! This is important in order to get that fluffiness in the rolls.

**2 hours seems like a long time, but don't be impatient! If it doesn't proof for the whole 2 hours, your cinnamon rolls won't be as soft and fluffy.

***I never really measured the dimensions of the rectangle. I kinda just eyeballed it to see if it will yield 12 buns once rolled up.

****You can use a knife if you want, but I find that it's easier to use floss to cut through the rolls to minimize squishing those beautiful spirals.

These are good for up to 3 days. If you're not eating them right away, I'll try not to judge you, BUT if you're saving for them for the next day, just make sure to microwave it for 20 seconds before consuming 🙂