by Denielle B January 8, 2022
Jump to Recipe Print Recipe

Another cider recipe! It should not be a surprise by now that this cold weather is making me crave hot drinks and ciders. This one was an experiment that turned out really well! Pears, an orange, a lemon, and some warm spices make this the perfect winter drink!

So I don’t remember how I ended up with a large bag of pears, but I did. Initially, I paired it with some blueberries for a galette, but I still had a ton of pears left. Then I remembered, I had a spiced apple cider recipe that I make in the Instant Pot, and I thought it would be good to replace it with pears and see what it would taste like. I’m really glad I tried it, because it tasted delicious! Just the right amount of sweetness and spice, this pear cider is sure to become a favorite in your household too! If you’d like to try a different cider, you should try making my spiced orange cider tea, also in the Instant Pot!

Don’t have an Instant Pot? No problem!

If you don’t own an Instant Pot, you can definitely still make this recipe–it will just take just a little longer. Put all the ingredients (except for the lemon juice) in a large pot and boil uncovered for an hour. Then, lower the heat to medium low and simmer for 2 hours, covered. Once it’s done, use a cheesecloth or strainer to drain and squeeze as much of the pear cider liquid into another bowl. Then add the lemon juice to the liquid and serve! 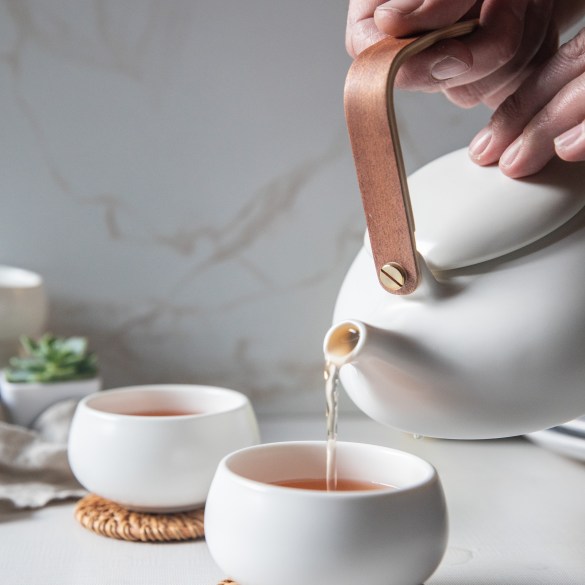 What a creative idea! I love pears; will have to try. The tea set is cute, too!