by Denielle B September 27, 2021
Jump to Recipe Print Recipe

I needed to find another flavor combination to add to my macaron repertoire. Since pistachio pairs well with any type of berry, I thought it would be good to make pistachio macarons. However, the trick was to figure out how to incorporate the berries. Finally, I was able to come up with well-balanced pistachio berry macarons.

I’ve played with pistachio and berries on a bake before. If you’ve been following my blog, you might remember my first attempt at an entremet using pistachio and strawberries as my base flavors. That was definitely challenging to make. BUT, I realized how delicious pistachios are in baked goods, especially when we add berries to the equation.

These pistachio berry macarons are also actually inspired by a blackberry pistachio donut my husband and I had at our favorite locale donut shop. He was the one who suggested for me to make something similar in macarons. If you’re interested in knowing more about that donut place, read this lifestyle post I wrote on it!

Initially, I wasn’t too sure on how to go about putting the flavors together in a macaron. But eventually, I stuck with a classic buttercream. I piped a big dollop of the pistachio buttercream in the middle on my shell. Then, I piped my berry jam right into the middle of the buttercream, starting slightly towards the bottom and slowly squeezing until you see the jam filling up to the top.

You are more than welcome to use any berry jam you want. Heck, you can even make your own! Personally, I’ve already done enough work just making these pistachio berry macarons. So to save myself some time, I opted to just use pre-made jam. For these in particular, I used Bonne Maman Four Fruits Preserves. It piped pretty easily, too.

For this, I wanted to mimic the pistachios and berries. So, I decided to do a bit of a marbling effect. Actually, this is my first time attempting a marbling effect on macarons. I’ve always wanted to learn different ways to decorate macaron shells. For beginners like me, though, I feel like marbling would be an easy transition as it doesn’t take a lot of time to do. Plus, I wouldn’t need icing sugar or any other extra decorating gear to produce something pretty.

As for the colors, this will really depend on the brand you use, but for me, I use Cake Craft’s food coloring gel. For the batter, I used one drop of leaf green and two drops of java brown to make it look like pistachio green. Then, I streaked a bit of funky fuchsia and deep purple on the inside of my piping bag. It kinda has that tie-dye effect, doesn’t it? 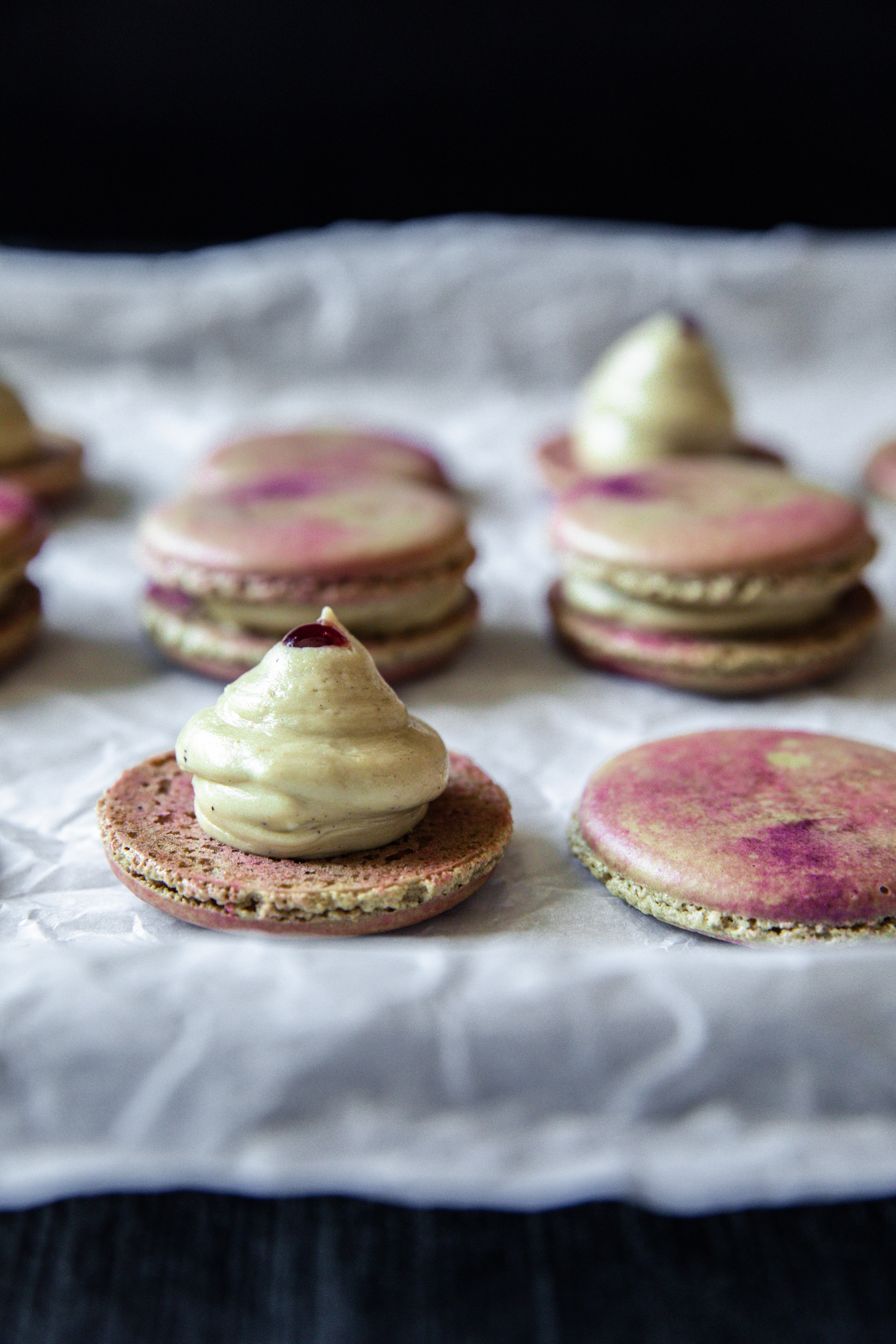 There’s not really a golden ratio for the macaron shells. However, I did end up stumbling upon a ratio of the ingredients that works for me, specifically for the Swiss meringue method. Feel free to use the calculator below (coded with the mentioned ratio) by entering the weight of your egg whites in grams. It will then provide you with the weight in grams for the almond flour, caster sugar, and powdered sugar.

If you’re like me, and you’re impatient, you’re gonna want to speed up the process in whatever way you can. Thankfully, my husband is a gear-do (a weirdo, but with gear). For one Christmas, he got me this awesome small portable fan (among other baking-related gifts, of course). It’s such a game-changer! I use it to speed up the resting process that forms the skin on the macaron shells, and of course the cooling down stage after baking.

I love the marbling, Dee. What a great touch! They look great for any occasion, fancy and tasty! <3